We have to WAIT for our morning walk.
SHE says SHE can't work three retractable leads...with three exuberant terriers, wearing gloves.
Or constantly take burrs out of paws.
So WE have to WAIT! 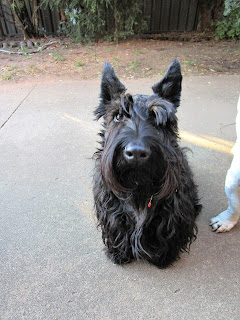 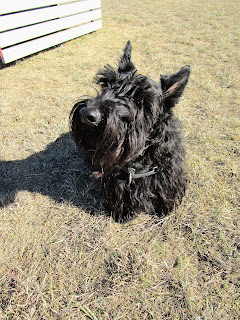 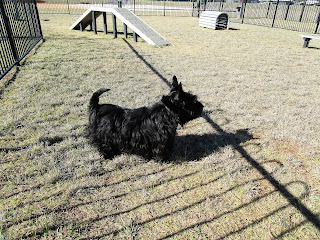 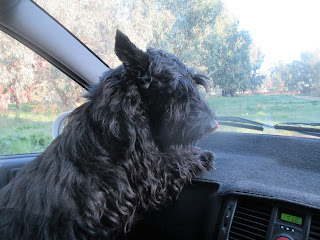 We've heard that people have Names for their vehicles.

Da Phenny has the Elephant Skate,
Frankie and Ernie have had Jennifer jeep, and Jessica jeep.
There are the Scotsmobile, Labmobile.... 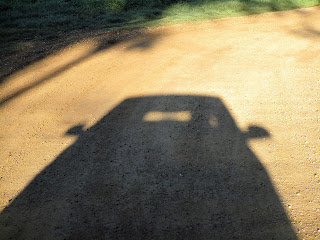 What do you call your mode of transport?

Now I am Six!
That would make a great book title...BOL! The story of Me.
I am a Designer Dog.
She says designed by a committee.
I have TWELVE brothers and sisters!
She says it probably explains my wonky leg.

Sadly, seven of us ended up in a high kill shelter.
BUT we were rescued by a wonderful foster mother.
When we received my official adoption papers,
my birthday was 22nd of May.
The same day as Kendra's.
So we always think of her.

We celebrated with a Kangaroo, sweet potato and green bean cake!
(That's what it said on the tin.)
With cottage cheese icing.

And look who turned up to celebrate with me! 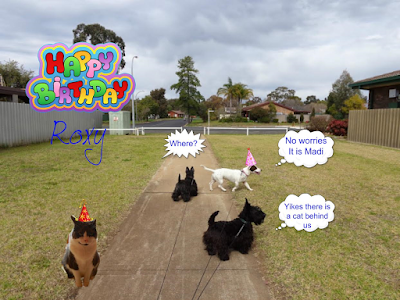 Thanks Madi, for the wonderful card!

Happy Birthday to all of my sisters and brothers!
I only know where four of you live now, but  know you have wonderful homes!

We've had a MAJOR change here.
SHE now has a job--taking two children to school in the mornings. (SHE tutors the little boy three times a week.)
Which sounds okay on the surface--more treat money.

BUT the downside is, we are not allowed in the CAR during the week because SHE says we smell it up and make it a mess!  And SHE doesn't want to constantly clean it....sheesh!

So going to the river on the weekends is more exciting.

Then yesterday we came home to these: 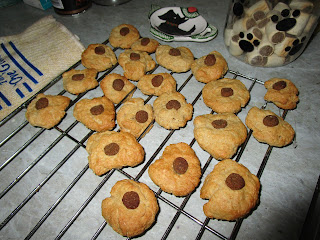 Tuna puree with a kibble decoration!
Hope you're having a wonderful weekend.

Recently, the scotties have been hanging out together more. Dui used to follow Roxy around all the time. 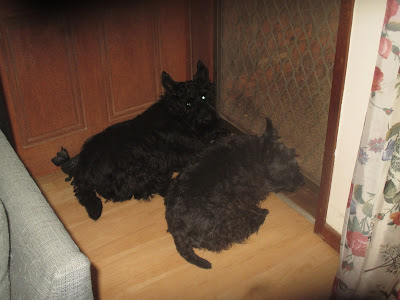 But now, the scotties are usually together....on guard duty. 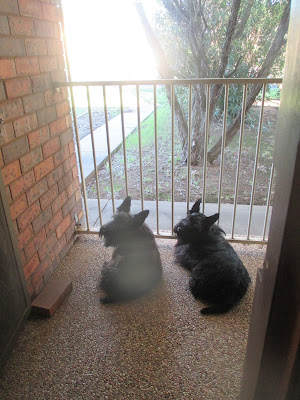 They prefer to lie companionably, surveying the 'hood,
while Roxy is a couch potato. 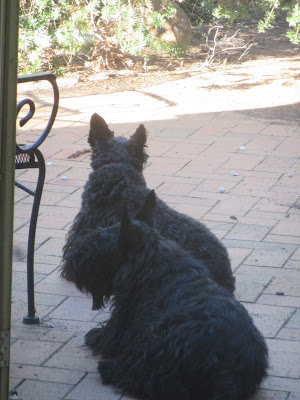 However, when there is excitement....a walk, or car trip,
Dui resorts to his naughty little brother routine and teases Bella relentlessly.
Bella will not go outside until both Roxy and Dui are in the car.
Curious.

Bet that got your attention.
Food is VERY important to us.
SHE calls us stomach hounds.
We expend a lot of energy during the day--as
you can see in the photo.
So food, good food is important to us.
We have a SCHEDULE for dinner
(So SHE can remember what to buy, what to defrost and what to feed!)

We have an excellent quality grain-free kibble as a base.
Then add
Monday:  Raw chicken, necks, legs or wings.
Tuesday & Wednesday: Grain-free wet food.
We get one-sixth of a small tin of beef, kangaroo, lamb or duck.
Sometimes the kibble is mixed with rice or pasta.
Thursday:  Raw chicken again
Friday:  a third of a tin of sardines in oil
Saturday & Sunday:  cooked chicken gizzards or hearts.
The amount of kibble is adjusted according to the topper.

We love dinner time.  Do you have an eating schedule?
Posted by Bella Roxy & Macdui at 2:44 PM 22 comments:

I'm in trouble again....
There wasn't any blood. And the lady wouldn't even take any money
to replace her running tights!

You may have noticed that a puppy was added while there was an older dog.  The older dog helps with puppy training, and the puppy never has to be left alone at any time.
After Carys, there was a vacancy.
At the same time HER mother died, and SHE received a small inheritance.  Time for another scottie.
(Scotties are rare and expensive in Australia--currently they are about $4000.)

Amazingly, there was a litter available in Sydney
coinciding with a planned trip to the big city!
Sunday morning, Mother's Day, SHE went to view the pups.
There were six, SHE sat in the garden watching their antics, but one, kept coming over and just standing in front of HER staring.


Naturally, SHE took the one that had chosen HER.
HER mother's favourite flower was the simple daisy,
So Hemskirk Charisma became 'Daisy'.
Daisy was the ambassador scot.  SHE loved life and everyone in it--except cats.
She was the one who let children and strangers pat her.
* * * *
Age was catching up with Kendra, she couldn't walk far, spent a lot of time sleeping, though rallied to bark at cats and eat.
She even ignored ankles.
The call of the scottie came again.
A breeder who had saved the pick of the litter for breeding, discovered that the puppies and mother had signs of demodectic mange.  SHE researched the condition and found that is was curable, so SHE agreed to take the little girl. 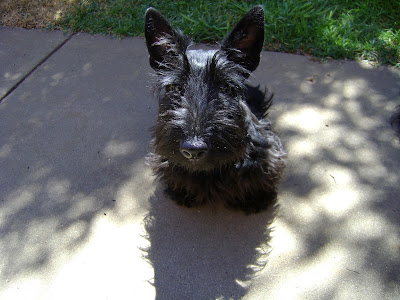 Bella arrived--with name, and a bottle of sheep dip she had to take every morning for a few weeks.

Before Bella, SHE had been researching Bull Terriers--personality, health problems, and reputable breeders
Next there was an event in Blogville.  Everyone was asked to post about an animal that needed to be Rescued.
This little face kept appearing... A Bull Terrier-Rhodesian Ridgeback who came with the name Roxy, joined the pack.


Age caught up with Kendra and she went to the Bridge.
Followed by Daisy, taken by cancer.

SHE put HER name on the waiting list for a female puppy,
but this photo of a male showed up: 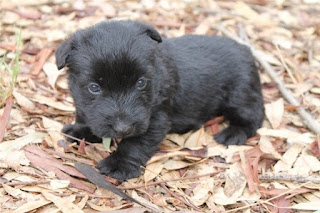 When he was old enough, MacDui, the TENTH
and probably last, scottie joined the pack! 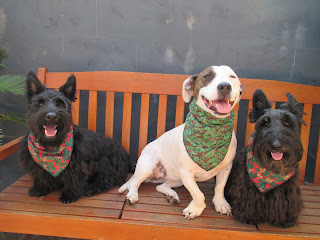 Thus ends the History of Scotties! 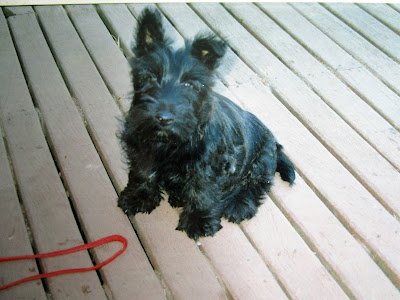 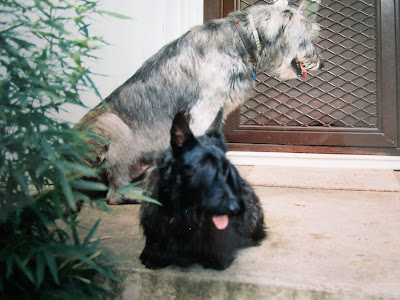 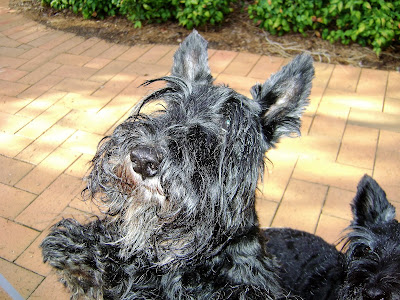 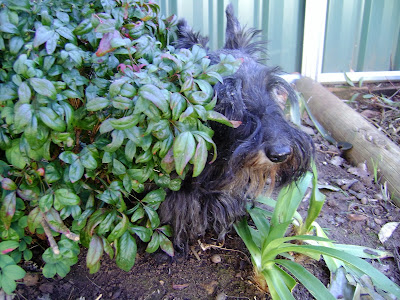 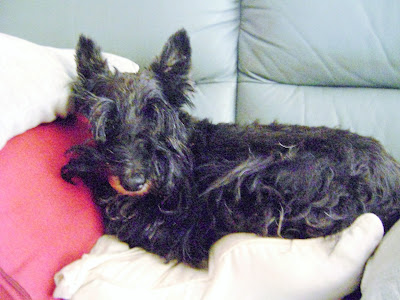 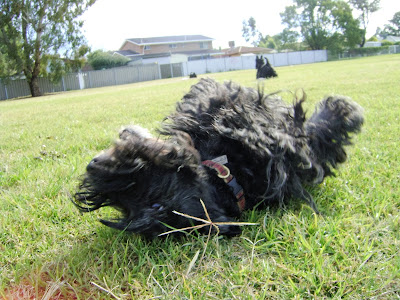 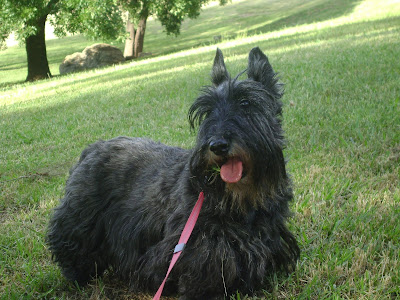 One of life's unique characters.
Posted by Bella Roxy & Macdui at 1:03 PM 13 comments: 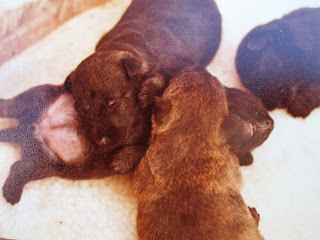 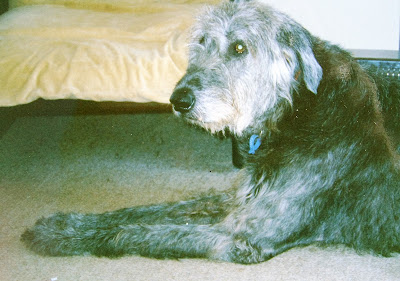