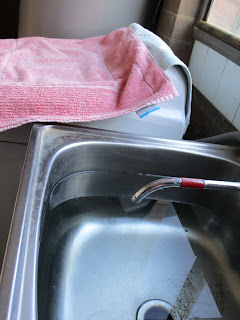 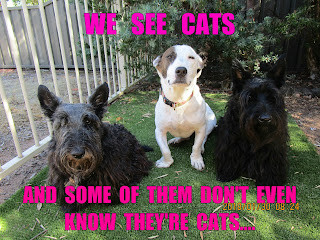 When cats see dogs they RUN for cover,
or flatten out and pretend they aren't there.
Everyone knows that. Once we tree'd a cat.
But
lately, we have a stalking cat.
It runs along behind us, hiding behind trees
and following us through front yards
no matter how much we TELL it to stop.
Then the other day, while we were barking trying to explain
the rules to a kitten, it just lay down outside our reach, rolled
on its back, waved its paws in the air and meowed!!!
Something strange is happening around the 'hood.

When you're a shaggy-coated terrier,
sometimes stuff sticks to you....

SHE's been having senior moments, but this afternoon takes the cake!

The recycle bin goes out tonight.  There was space, so SHE decided to put some old boxes in.
One was the Christmas box My Ernie sent us.
It still had the wrapping paper and bubble wrap in it,
So SHE pulled the paper out
and found
a small wrapped package.
It has been in the bottom of the box for a MONTH!
SHE thought, from the feel, that it was a bandana
BUT was very surprised to find: 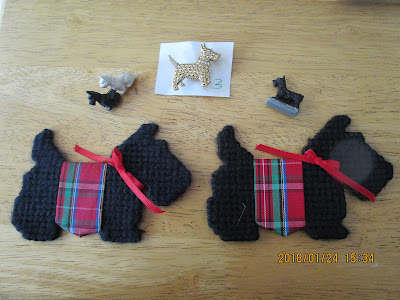 scottie pins and magnets for HERSELF!
Would you believe it?
A whole MONTH after Christmas!
Ernie must have wondered what happened to that part of the present!

This senior moment stuff is a worry! 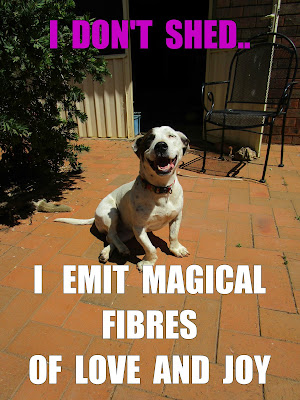 Shamelessly borrowed from another meme. 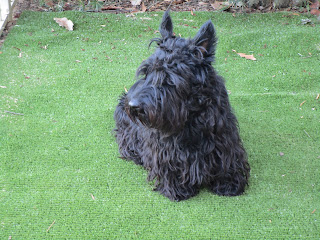 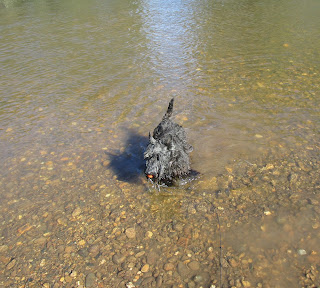 SHE says we've got quirks.
(We don't think that's complimentary.) 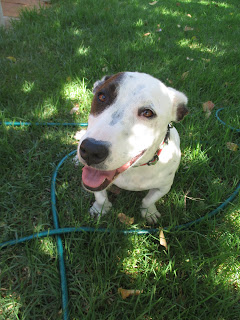 I Roxy, am afraid dislike cleaning implements:  broom, mop, duster, vacula...etc.
Whenever SHE's wielding one of these, I run!
I also hate loud, or sudden noises.
I'm afraid of stormwater drains except the ones
in front of our house.  They're safe and don't suck  you in.
But the others I give a wide berth.
I'm known as Me-First Roxy, because I always have to
be first.  I try to pre-empt whatever SHE's trying to do
and usually get told to get out of the way.
I am a talker....wooing when excited or to let HER know
when SHE's letting the side down.

Do you have quirks?

Finally, we got on our way and look who was at the river!
Kelly and Ron.....just look at them striding out on the track walk. 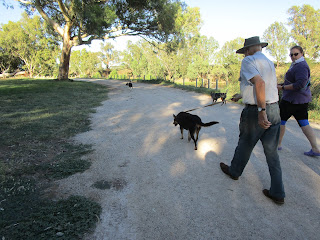 Then down by the river.
Kelly has to stay on the lead and can't get her bandaged leg wet,
but she was just happy to be there. 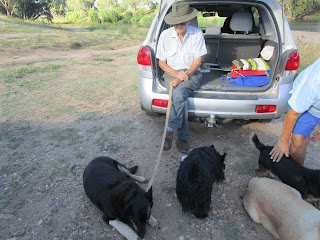 Even Flash showed up.
His family's ute was wrecked so he hasn't been coming. 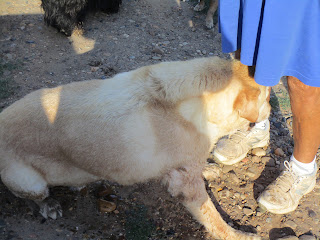 We had loads of fun this morning.  There was a slight altercation between Tiger and Rex. Tiger had a scratch on his nose but it
was soon forgotten.
THEN
look what happened on the way home... 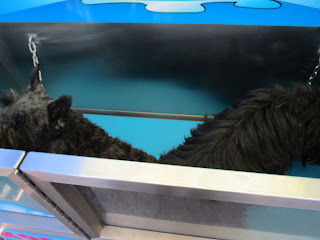 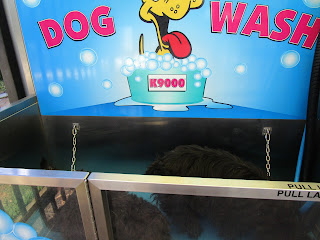 We stopped by the public bath.
Bella slipped her collar, but was tricked and carried
to the torture area.
The scotties had a full bath.
SHE had to pay $88 during the week to have the drain
unblocked again, after so much river mud, clay and sand went down the drain after the usual dunking.
Now we're home with 'Roo Chews'. 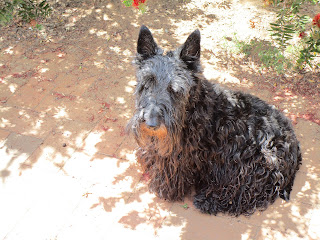 We had thunderstorms during the week.
Bella doesn't like them.
She crawled up next to HER for comfort, but
SHE noticed that Bella smelled VERY doggy.
Though Bella always gets dunked....bottom half..after the river, it was the top half that was whiffy.
So poor Bella had to have an all-over bath.
Dui and I, Roxy, are thankful it wasn't us!

we were getting ready to go home, when a ute (utility truck) came up the track.
Speeding, actually.
SHE grabbed Dui, who loves to go with the
naughty dogs to chase trucks,
and Roxy who occasionally goes along as a spectator.
The naughty ones ran at the truck, and our
friend Kelly was with them. She doesn't usually chase things.
No one quite knows exactly what happen, but
Kelly was hit.
She screamed....a horrible sound!
The driver didn't even stop until he got up near
our group, then said oh was that a dog I hit?
He wasn't very caring, surprising as he had two dogs on the back of his truck.
Anyway, poor Kelly managed to get back to her ute,
blood pouring out of her mouth and eyes.
She didn't look good.
Ron, her owner, who will be 90 next week, though distraught
went straight to the Vet.
We followed a bit later,
Kelly was on the truck by herself.
So SHE pulled up and cuddled Kelly until Ron came out to get her.
Poor Kelly was a mess.
SHE thought it was the last time we'd see Kelly.

Her jaw was broken in three places, and she was badly concussed
with bleeding on the brain.
The Vet managed to bolt the hinges of the jaw and bring the two sides together in the front aligning her teeth before wiring the jaw together.  She showed no signs of brain damage.
Monday, she was allowed home.  She has to be handfed but actually looks okay.

Do your peeps hog the bed?
Do they say 'not enough room'?
Do they disturb you at night with their tossing and turning?

May we suggest one of these 12-foot beds? 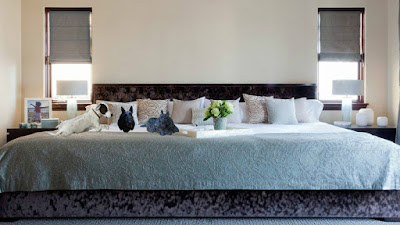 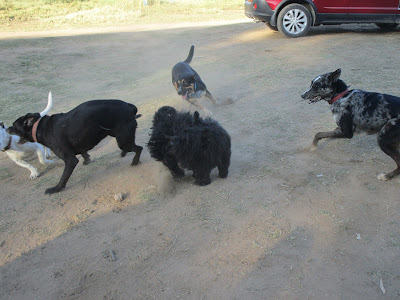 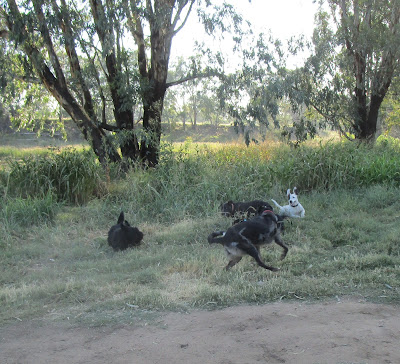 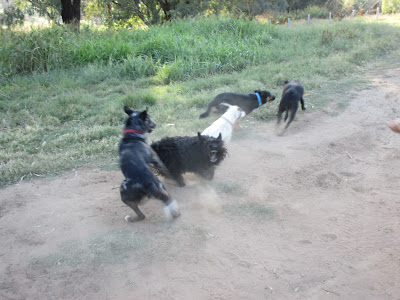 Because Dui and Roxy chase Coco, Ruby has decided it's her job to bark constantly
at Dui.  Every once in awhile, he turns to snap at her.  Ruby is actually a coward.

Bella just waits for someone to come play the rock game. 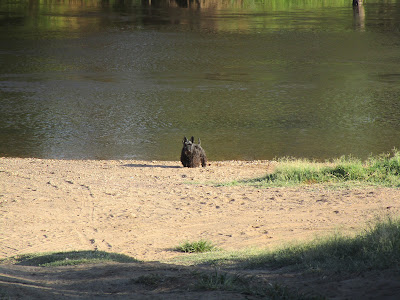 Actually it's not much different to any other day.
Have a great weekend, keep warm......or cool depending on your hemisphere.

Just taking a short break at the river, in the shade of a tree, because SHE says our shadows mess up photos, to say Thank You. 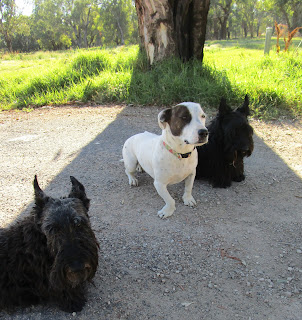 We didn't sign up for the Christmas card exchange this year, but we weren't forgotten.
We thought we'd acknowledge and publically thank
those who sent us cards anyway....
some by snail mail and some by e-mail
Thank you,
Da Weenies
Hazel and Mabel
Lightning, Misty and Timber
Ruby
Madi
Da Phenny
Princess Leah
Millie and Walter
Sweet William
Kisses to all of you!
and my Ernie!