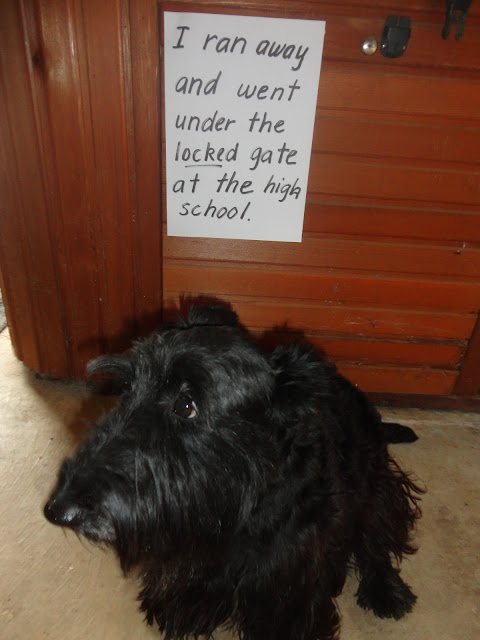 Today we hit the century mark!

After our early morning walk lasting one hour--SHE still had time to make a cappuccino before the 6:30 air service left for Sydney-- we spent the day like this......


We're under the ceiling fan that sends the A/C down.

Tomorrow and the weekend are supposed to be hotter.
You know where we'll be if you need us.

If there is one....well billions, of blots in our little Paradise it's
FLIES!

The past few mornings they have been out with a vengence.
They are persistent little buggers.
Now SHE's experienced flies all over the world, but none so far compares to the Aussie fly.  It is a national icon.

Flicking them away is known as the 'Australian Salute.'
(There's a humorous article you can read here
if you have time, we think you'll enjoy it.)

Now that summer is nearly here--this weekend--they have been annoying HER especially on our walks.  SHE uses some very colourful language because with THREE leads, keeping flies off HER face and buzzing around HER ears is difficult impossible.

That's why we had to have an older photo of us for this post.  Using the camera just isn't going to happen!

I picked up a hitch hiker today. 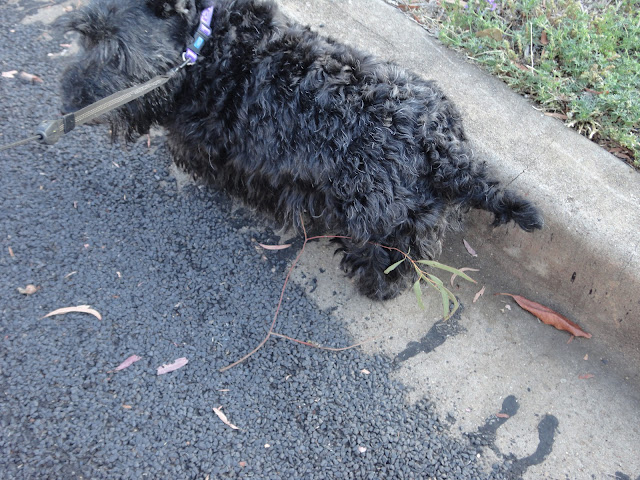 Early yesterday morning (Thursday) we went for a quick 'business' walk and then piled in the car to go to our main Park.  SHE wanted to get some pictures of us with the Jacarandas flowering. 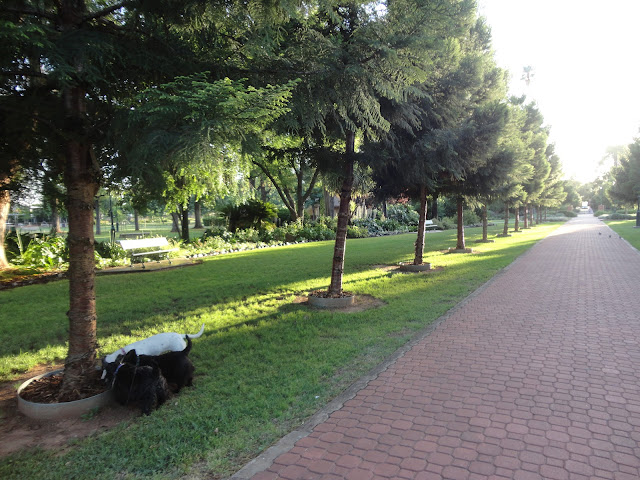 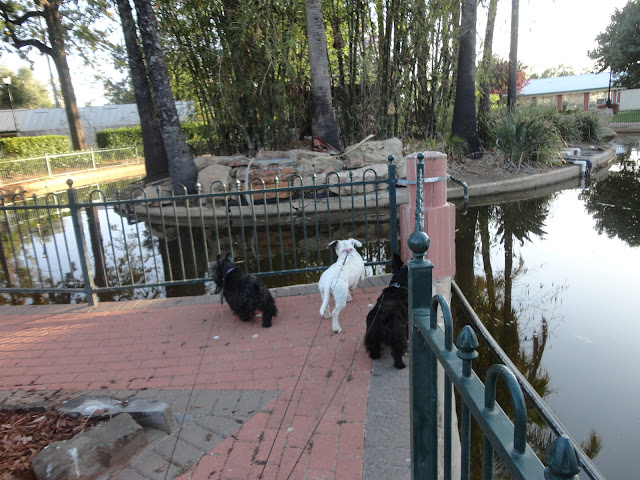 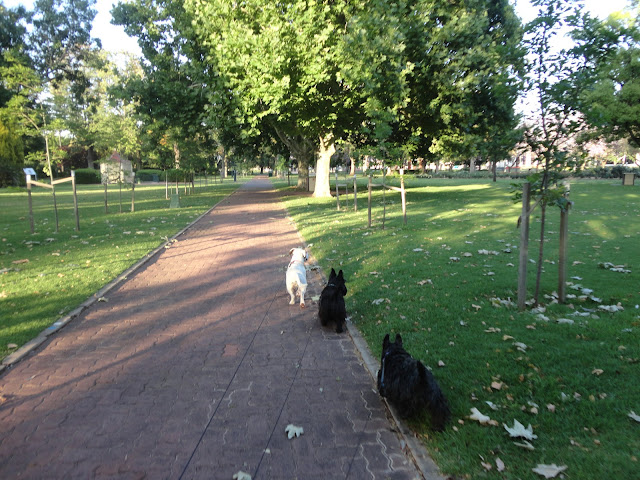 We had a great time!
Note: that was a Bougainvillea that we were posing in front of in 'Black dogs and Shadows.'
Posted by Bella Roxy & Macdui at 12:47 PM 37 comments: 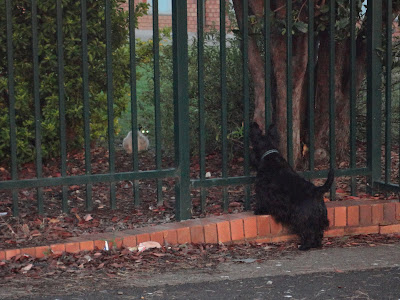 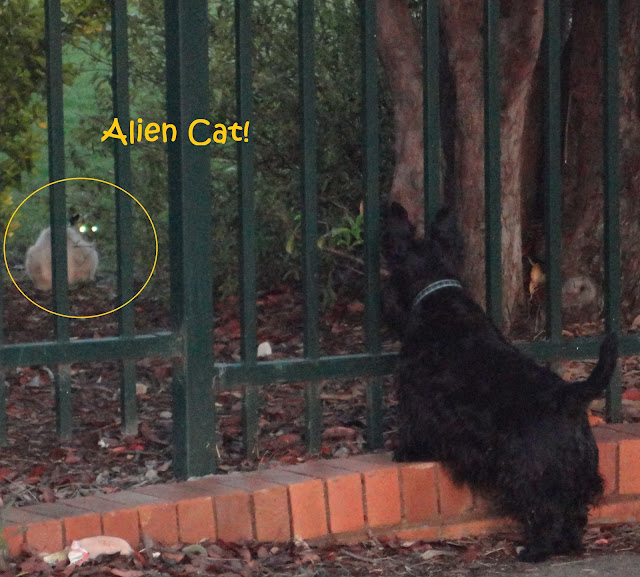 Roxy has been turning her nose up at our Canidae kibble that we have to order from Sydney.

So SHE decided to try BlackHawk and found that it's sold at a local stockist.  We had a small bag to try at first,  it was a success,  next came the large bag. 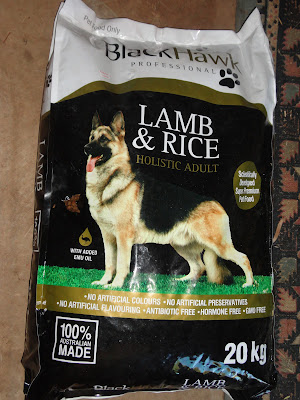 While SHE was helping us blog.  SHE heard a snuffly noise followed by some crunching in our back room. 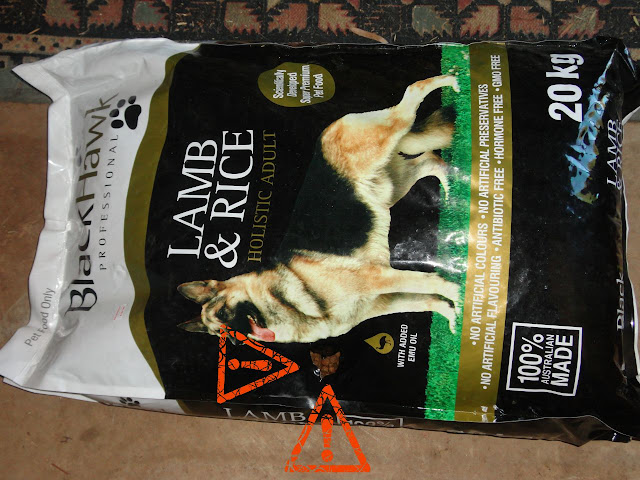 Morning at the River


We went to the river yesterday morning.  We missed last week because of Roxy's ear....and having to have the blood removed from the carpet... 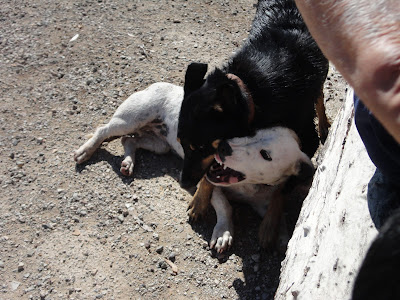 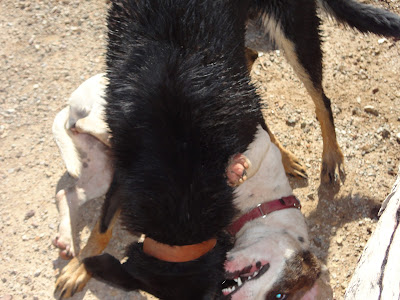 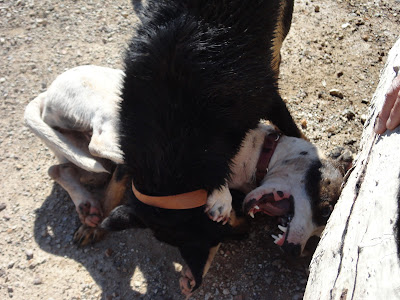 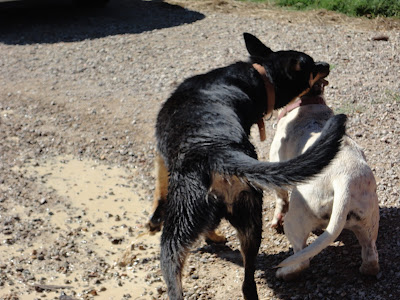 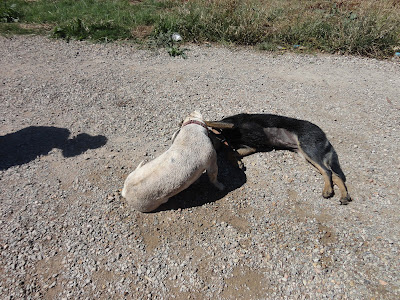 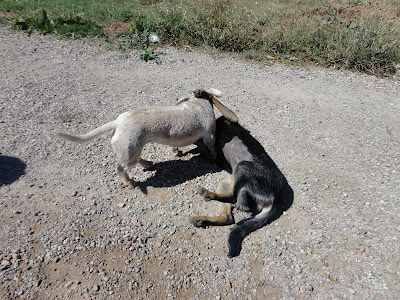 And Roxy's ear held together!!!
Bella and I were there, too--not that we get much of a mention.
Posted by Bella Roxy & Macdui at 1:18 PM 27 comments:


Every once in awhile nice, unexpected things happen.
Because we take long walks all around our neighbourhood and other areas, we're fairly well-known.  Well, maybe we should say we're recognised.


We often see the same cars pass us, or people walking, or in their gardens.  Most of the time, the humans just give a friendly nod or wave.  We, of course, are
more interested in other things.

All too often, we meet dogs that have escaped from their yards...or been abandoned...or whatever.
Invariably, they are huge intact males that are called pig dogs.  Pig dogs are crosses of Bull Arabs, Wolfhounds, Danes, Bull Terriers....anything that might make a dog big and want to hunt feral pigs.

So far, we haven't had any problems.  Most dogs off leads or not in their own territory might look at us and then move off.  Some race over ready to attack and see we're girls, so they stop.  SHE usually makes us stop and then talks to the dogs and they wag their tails.  But SHE is  wary every time we meet one.

This morning as we were heading home, SHE waved to a neighbour who lives down the street as he went off to work.  We only know him to wave at and would never be able to recognise him on the street.  We noticed he turned his truck around and came back down the street.  Then we saw a huge dog across the road.

He'd come back to ensure that we would be okay.  This has happened a few times to us, people who see us every day and stop, do U-turns, or invite us into their houses....strangers who help when they see a potentially dangerous situation.
Always makes us feel good.

The dog turned out to be the usual boof head who we hope has found his way home.
Roxy did not help the situation as she was so excited at seeing a potential playmate.  We thought she'd learned something from her last encounter.
Hope something nice happens for you this weekend.
Posted by Bella Roxy & Macdui at 6:41 AM 26 comments:

We found this in our local free newspaper today. 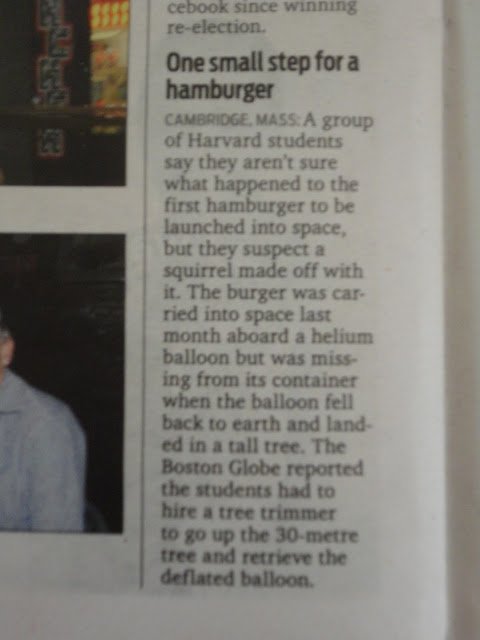 Yesterday, we posed for our official Christmas photo. 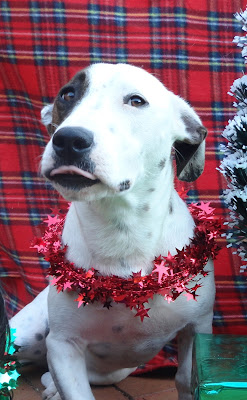 Roxy expresses her opinion of the whole deal.
Posted by Bella Roxy & Macdui at 1:33 PM 32 comments:

Sugar asked us to post about our Tasty Treats on Tuesday.

See that ice cream container?  Well, that's where we store our yoghurt treats.

We got these great trays online.   SHE just googled 'bone shaped ice trays australia' and we got several hits.  We were able to get these trays quickly.


Now, just between you and us, SHE's a bit (whisper) lazy.  Yep, it has to be said.  So when SHE saw a recipe that said, freeze a layer of yoghurt, add a layer of pumpkin-- freeze and then another layer of yoghurt; SHE thought SHE'd just blend yoghurt with other stuff and pour it in. 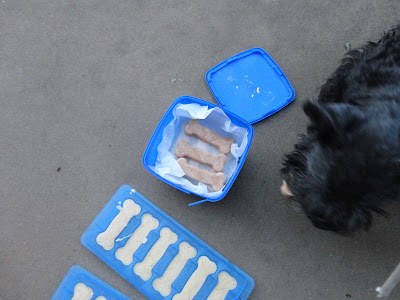 Our bone trays are never idle now.  SHE blends baby food, peanut butter, tuna.... you name it, if it's something we like, it goes in. (Oh and a bit of milk so it pours easily.)
We haven't turned our noses up at any treat so far!
AND we do like the coldness.
It's warming up here....been in the 90s.
SHE's always cold so the A/C doesn't go on until it reaches the high 90s or 100s.
Our little house is like a cave, so it doesn't heat up until the afternoon anyway. 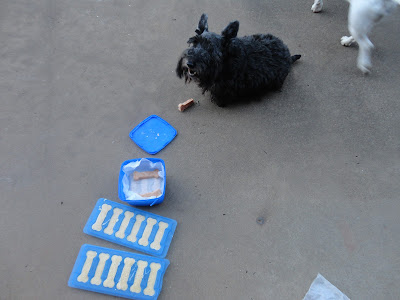 Now, SHE's thinking of crunchy things SHE can put in our treats...

like liver treats or our favourite fish skin treats.  We can't wait.
So Southern Hemisphere pups, now that we're heading into summer, get your humans working on some cool treats for you!  These are delicious and if you have a lazy human, it's just the thing.  SHE says the hardest part is cleaning the blender.


(Note:  The glue has held on Roxy's ear and it is healing well.  We will be ready for the wild Saturday mornings at the river this week.)
Posted by Bella Roxy & Macdui at 1:38 AM 37 comments:

Roxy went to the Vet's yesterday ( Saturday) morning.  Dr C closed the wound with tissue adhesive and gave HER some stuff for a bandage and hold down the ear.  Roxy acted all pitiful.


By this morning, the bandage was more like a collar--but the tip of the ear was still held in place.  It didn't seem to bother her.  Here she is in her stalking position.  She's waiting for Bella to move, so she can attack. 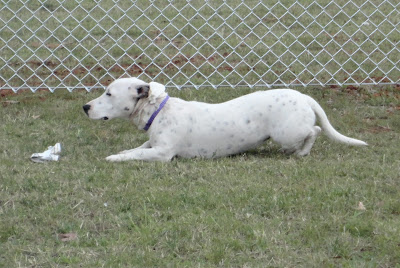 She was re-bandaged after our walk this morning, but by afternoon,  managed to free her ear, so we went for a walk without a bandage.  So far, there has been no more bleeding.  The glue seems to be working!

The blood has been removed from the wall, doors......
and the carpet was cleaned this morning.  The house no longer looks like a murder scene.
Posted by Bella Roxy & Macdui at 1:32 AM 40 comments:

Roxy is an in-your-face kind of dog.  She thinks all dogs love her and want to have her hanging off their lips.
On our walk this evening she met one that didn't!
A foxy that didn't want to play and pounced on her, scratching her ear with his tooth. 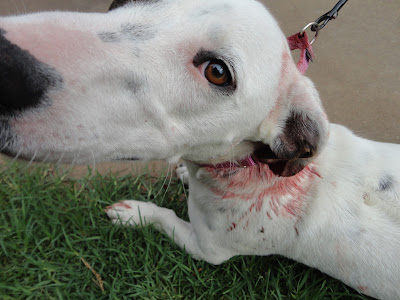 She left a trail of blood all the way home.
And on the carpet inside. 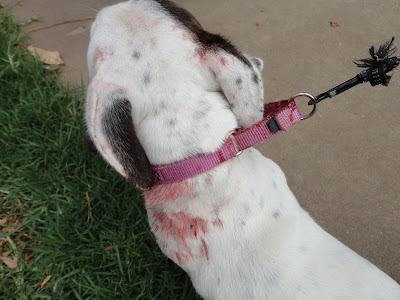 It looks worse than it is.  The other side of her left ear has a long, deep scratch. 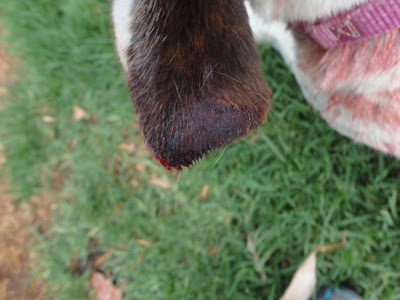 After cleaning her up, she shook her ears and started it bleeding again.  A quick trip to the VETs found it was closed. 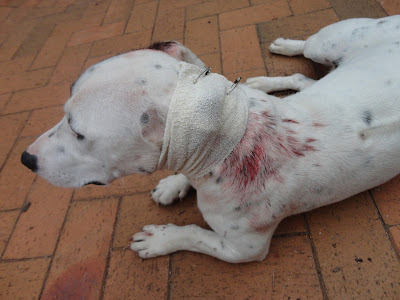 So SHE has put antiseptic cream on the cut, bound it up, and bound the ear to Roxy's head in hopes that it will be immobile. 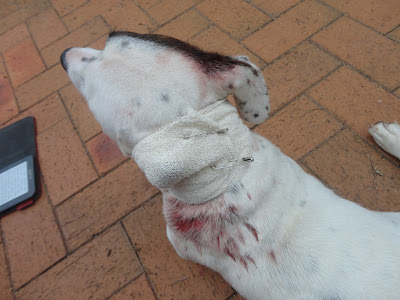 Then we each--not HER, though--had a yoghurt bone to make Roxy feel better.
And now Roxy is trying to get Bella to play indoor wrestling....Sheesh!
Posted by Bella Roxy & Macdui at 12:23 AM 48 comments: 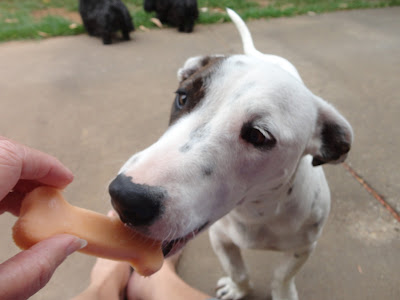