...........the rock.
Bella loves the rock game.
Because she broke the tip off a tooth, real rocks
are no longer used.
Frankie and Ernie sent her a blue plastic-y foam rock
a few years ago.
But, it accidently floated away, down the river.
Some replacements were found.
They have had paper clip wire shoved through them,
knotted and then plastic zip tags through that.
The rock can be attached to the retractable lead and used
like a fishing rod. 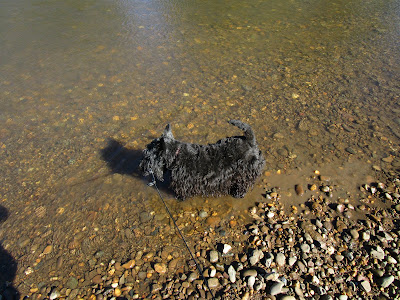 Bella loves it.  She sometimes just refuses to give it up until
she's chewed it for awhile.
Yesterday (Sat.) she chewed through the zip tag and
the rock was floating down the river.
The peeps tried to get Ruby, who loves to retrieve a ball,
get the rock.  They threw real rocks
close to it, but Ruby kept looking for the real rocks.
Then her sibling, Coco, who loves to take Ruby's ball,
took time out from the 'usual' game,
to swim to the middle of the river and bring back Bella's rock!
This morning, (Sun) a new tag was attached, but Bella
chewed through that one, too!

If it happens again, we think it's the end of the rock game.

Playing is a serious business... 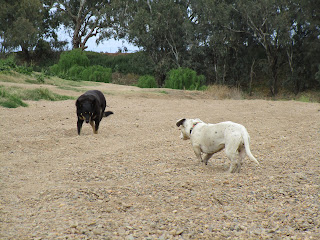 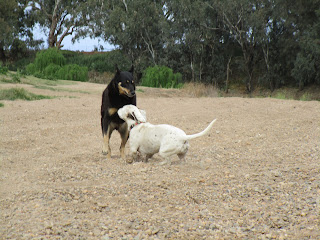 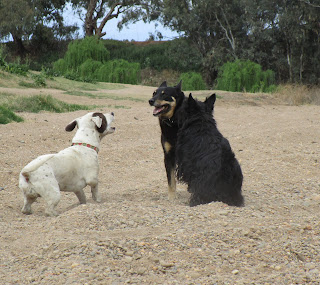 Do you remember Maggie, Maggie and Maggie

those cheeky magpies that ate our treats?

Well....they arrive several times a day to be fed.
They were getting the cheap round treats
and SHE tried our long, delicious jerky treats. 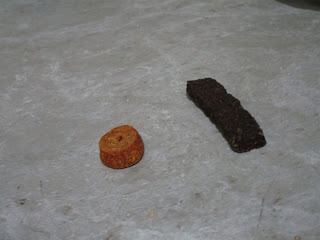 Those birds just stuck their beaks in the air
and acted like they were going to be poisoned. 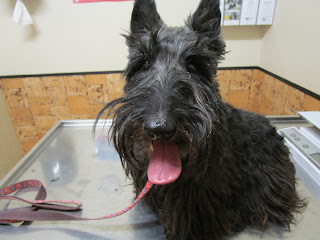 When Bella had to take antibiotics, it was easier to put them in a ball of mince (ground beef), but SHE gave some to those
magpies.
They loved it!
Now they race over if SHE goes outside.
And sometimes, they come up to our little verandah 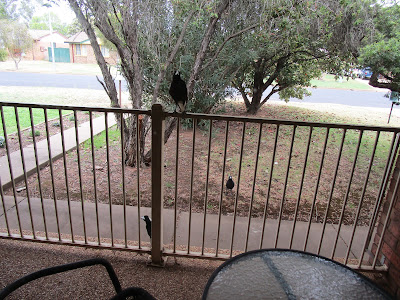 And peer into our house looking for HER! 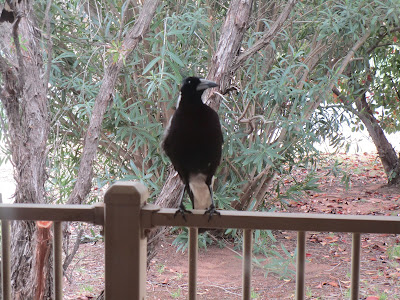 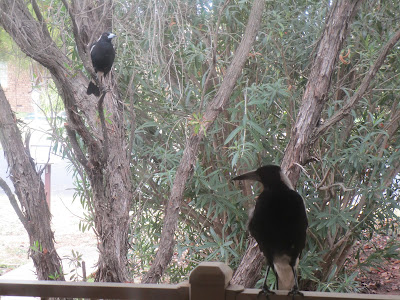 They are such gluttons!
Please excuse the barren lawn.  Today is the first day of rain since early August.
We did get in an early walk before it started, but we've been sleeping most of the day.
We've still had three very wet, bedraggled magpies dropping by, though.

It's been one of those weeks...

Monday was a public holiday, so EVERYONE was at the river in the morning.
Dui and Bella were entangled in burrs that had to be cut out.
Early....about 2:30 a.m. that night, Dui wanted out.
We all went out, then after about 10 minutes, Bella and Roxy wanted in.
Twenty minutes later, Dui barked to come in.
About 20 minutes later, he wanted out.  This was the pattern until 4 a.m. when SHE gave up any chance of sleep. 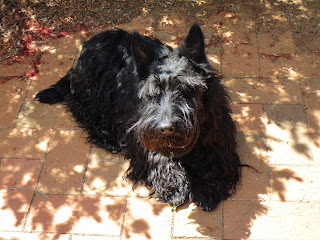 Watched the depressing news...Las Vegas, Catalans, various murders and fatal car accidents....with cappuccino.
Then went into the study to find two huge
grass-filled vomits on the carpet.
Dui had decided to vomit in comfort.
As steam cleaning had been on the list of things to do,
SHE cleaned the carpet at 6:30 a.m.
We only got clean walks that day.

What is Roxy watching so intently? 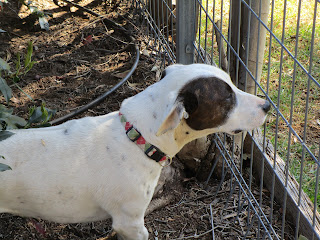 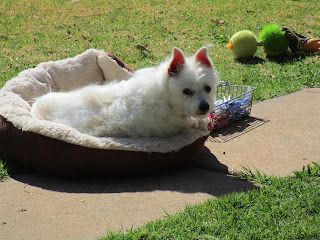 But no, it was just a visitor.  Jedda who lives there is a
tiny black poodle. 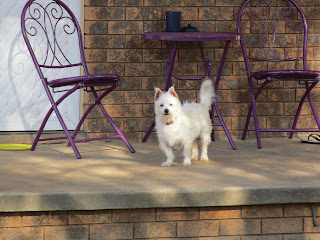 After taking these photos, SHE lost the camera.
Just put it down and couldn't find it...for two days.

Also, the back passenger side window went down
and won't come up.
Dui is getting the blame, he loves putting his
wet, muddy beard over  it.
Oh well, next week the timing belt has to be replaced, just add the window to the bill....
The weather has improved.  Cool nights and warm, sunny days,
for lying outside. 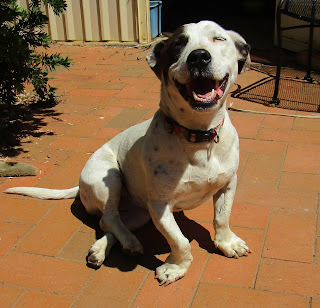 We are supposed to get some much-needed rain on Sunday.
Hope you have a wonderful weekend.