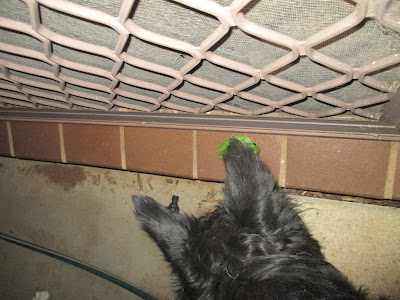 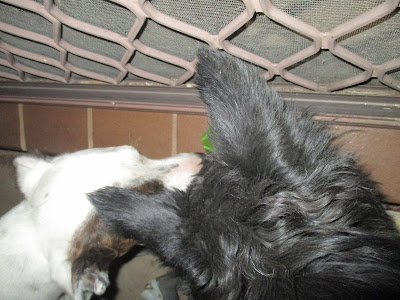 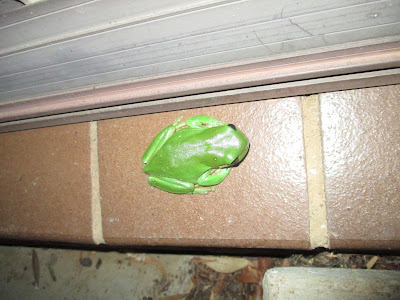 This froggy visits every night (this was taken with a flash).  He doesn't move when Dui comes close, so Dui leaves him alone.

We hope everyone has an enjoyable, safe Thanksgiving.
We're taking break from blogging....

Tasty Tuesday (and other stuff)

This morning I looked for MY cockie, but it wasn't there..... 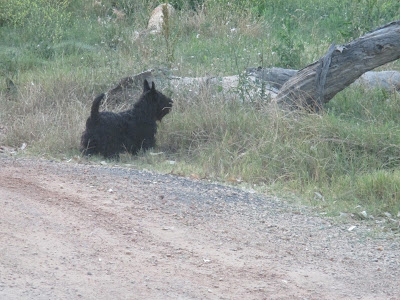 SHE thinks this is the bird.  It was way down by the river.
But, really, who can tell one cockatoo from another?
Dui was NOT shown the bird. 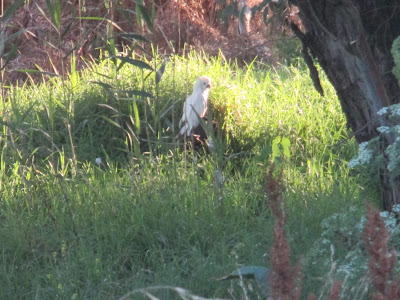 Later in the day, SHE went to a friend's who was trimming LAMB chops for dinner, and we got the off-cuts and a couple of whole chops deemed not good-looking enough for the guests.
SHE stewed them up with carrots and rice. 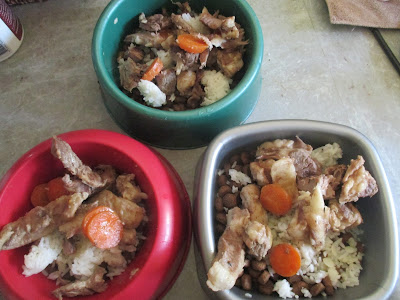 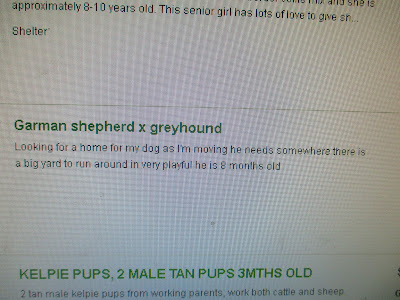 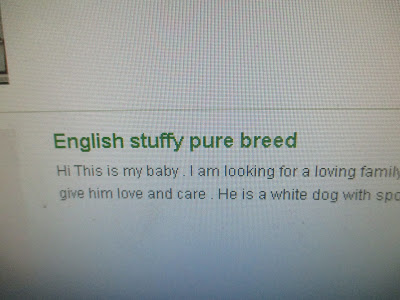 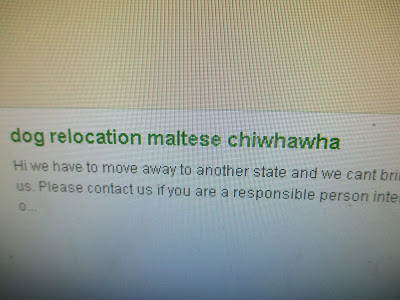 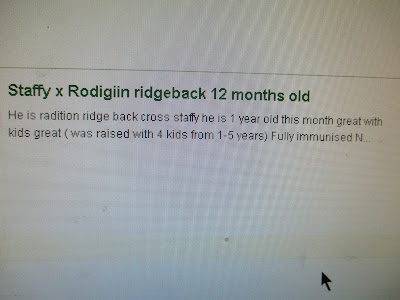 I, Dui, nearly caught a cockatoo this morning. 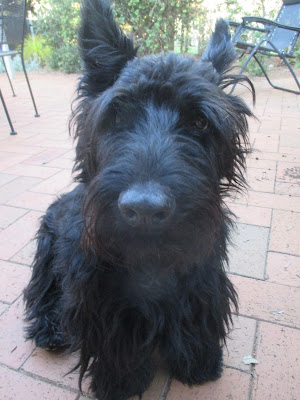 There's no photograph, but it looked like this one we found
on the internet. 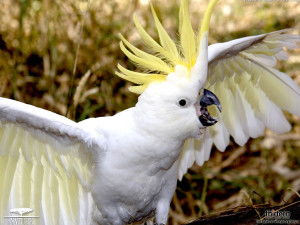 If SHE hadn't been jumping around between me and it screaming.......
Foiled again.

After two days of extreme heat (over 100°F), a cool front came through and this morning
was wonderful.
We had three new dogs at the river,
bringing this morning's total to an even dozen.
We had all the 'regulars', Pi, Chloe, Jake, Kelly, Flash, Buddy and us:  Bella, Roxy and Dui.
We haven't seen Rover and the other Flash for months, and Pi
brought a friend--Harry!
We had a wild time, running, swimming, wrestling, barking,
and eating treats.....
We stayed for two hours and when we got home,
it was time for Bully sticks and beef tendons
(Roxy won't eat bully sticks.)

Dui was so excited at the river that he let loose with a long series of AARRROOOOOOs!
We spent the rest of the day, watching HER work in the garden,
sleeping, looking for the cats, sleeping, barking at people walking by our house, sleeping.... and then it was time
for dinner--chicken gizzards in gravy over our kibble!
A very satisfying Saturday.

We're still here, our computer is acting up so we've only been in Blogville until SHE gives up in disgust. 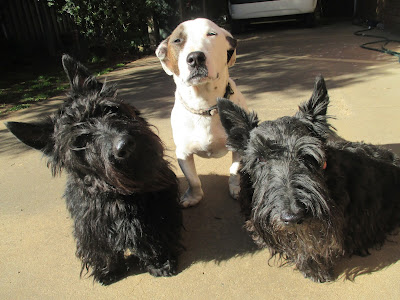 Anyway, we've been busy and threatened with being listed on Ebay.
It's getting light at about 5:00 a.m.
Saturday morning when we went out, there was a cat
in OUR back garden.
Well, we went crazy.....barking, racing around, crashing through bushes.....
We got all the dogs in the street barking, too.
SHE has been laying low, hoping the neighbours will forget
their early morning wake up call.

SHE ignored a morning squeak from Dui, thinking it may have been part of a dream.
Have you ever seen your peeps hopping around with an arm load of laundry and a blob of poo adhered to her instep?
Well, we thought it was funny.

SHE thought that sheep three paddocks over didn't warrant Dui being put on the leash.....WRONG!
He went under THREE fences to chase them.
Lesson learned.

However, on the positive side our No Sibe Fence around the little garden has worked.  We've had loads of Bok Choi, the tomato plants are loaded with green tomatoes.  And yesterday was our first harvest of  Cute Cumbers. 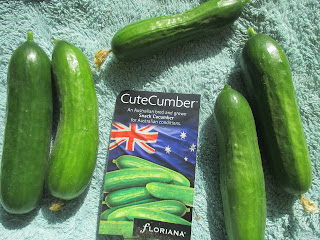 Can you smell it, Roxy? 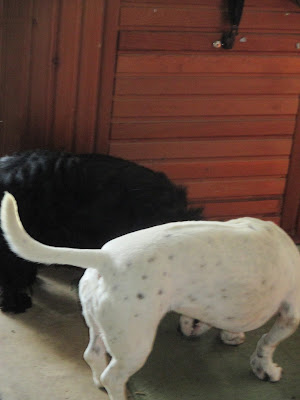 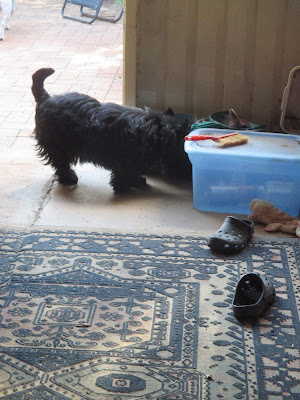 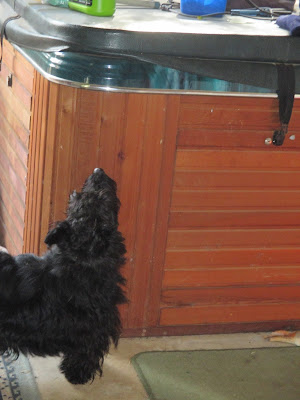 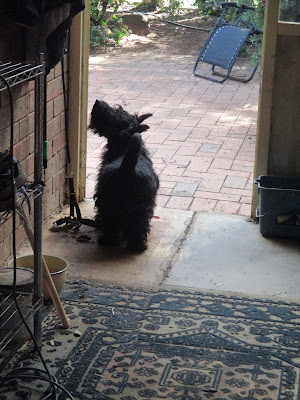 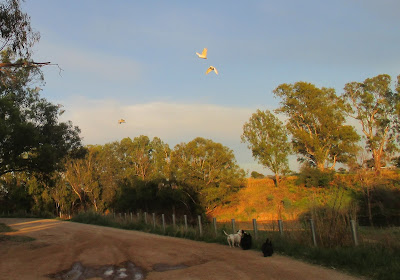 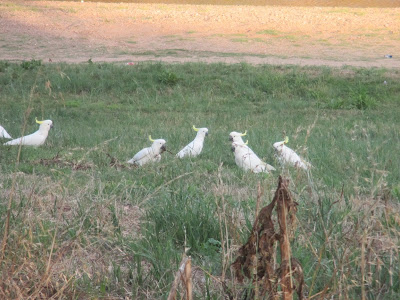 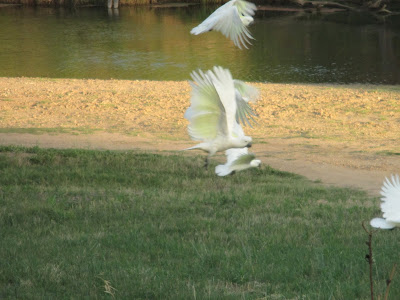 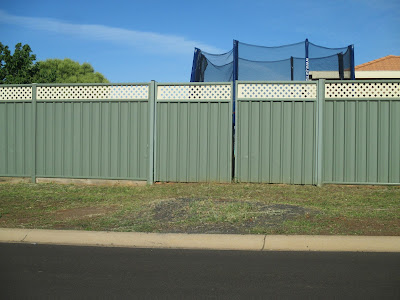 Every time we walk past, it barks viciously at us!
Posted by Bella Roxy & Macdui at 1:25 PM 25 comments:

We might not have Chewy, but we got a box of treats the other day. 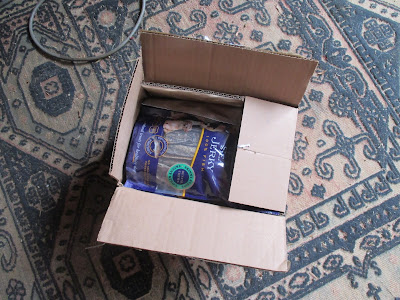 It was filled with our favourite Fish Jerky treats. 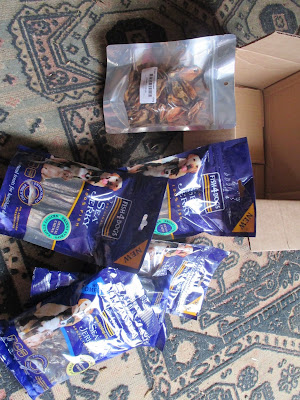 There's something new.  Dui checks it out while
Roxy photobombs on the right. 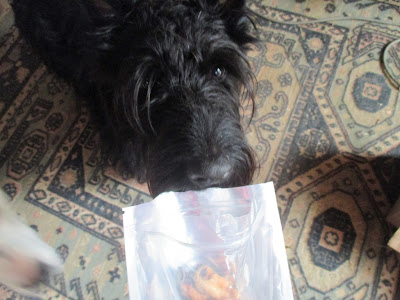 Bella decides (while Roxy photobombs) that though she loves the fish treats, 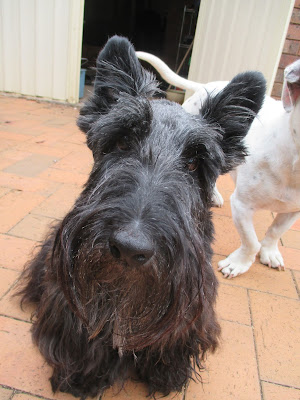 she is not a fan of the Green Lipped Mussels. 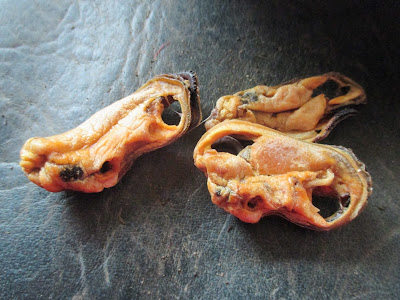 But Roxy and Dui love
Everything! 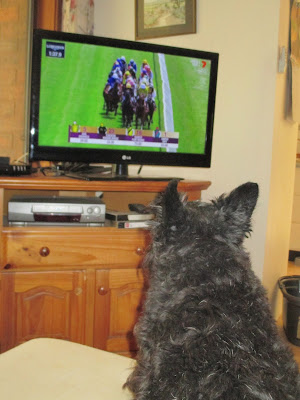