Somedog left Foxy in the carport. 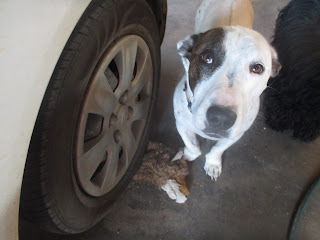 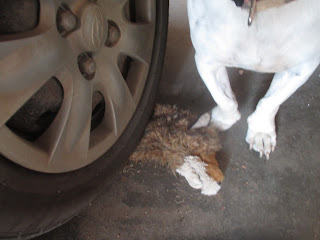 We love all the recipes for treats, and the idea for the Mini BARs.

Oz's advice to take a new walk, was a good one, though ours didn't turn out the way SHE thought is should.
But sometimes we're not sure about the advice.
For instance, this morning SHE was reading about Moth being
abandoned while her family went to a Wildlife Park.
One that rehomes animals to give them a chance
to be the animals they should be.

That reminded HER of our zoo.
It's only about a mile away.
It is a breeding zoo.
Naturally, we weren't allowed to go.
(Abandoned like Moth)
This is one of the black rhinos bred here. 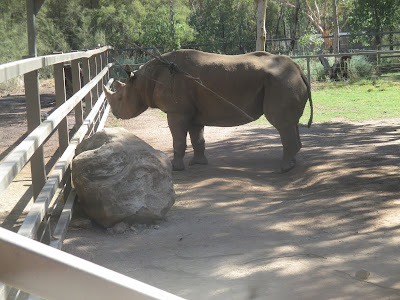 SHE went  to see the new babies.

This is Sabai, you can see he's a new Asian Elephant.
(He's as good at avoiding the camera as we are.)
He's with his mother and Aunty Porntip. 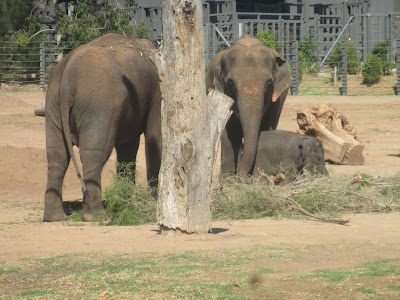 He was digging in the sand, and wandering around. 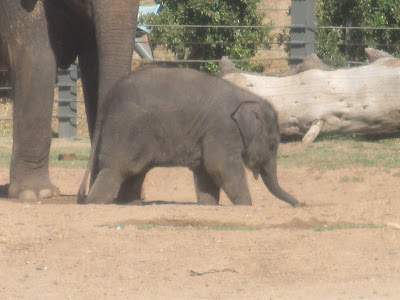 Next were the lion cubs:  four boys with their mother
and older sisters.
Naturally they were sleeping during the heat of the day--but there was one, there's always one, that
attacked the others, dug in the sand and woke everyone up. 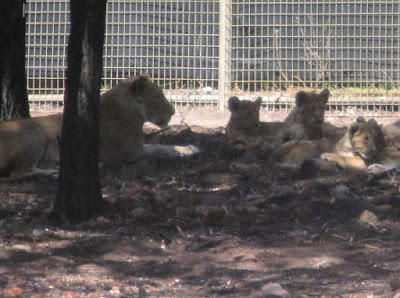 And Kinley mentioned getting a trim, so she could see.
So SHE's been looking askance at the scotties.
Information isn't always appreciated by us.
Just sayin'.

On Wednesday morning, we took Oz's advice
and went on a NEW(ish) Walk.
Only newish because we have been there before,
a long time ago.


The plan was to go EARLY, before too many people were around.
We were going to walk over the BIG bridge
on the south side, then through the playing fields
to the Pedestrian bridge, and all the way back to the car.

It was dark when we arrived (the bridge does have lights)
but found the under bridge walkway fenced off.
We clambered up through the bushes and
walked across the north side of the bridge.

We had to keep walking because there were a few
people out on the narrow walkway.
When we got to the end of the bridge,
Dui did a poo.
While SHE was cleaning that up, our leads
got tangled.  And just as SHE had them sorted,
some walkers came by with a yappy dog.
We became tangled again.
More people and dogs came by. We went
down a side street, but there were
GROUPS of people with Personal Trainers;
cyclists, groups of runners, and
people with dogs.
Not even 6:00 a.m and it was crowded.
We walked under the railway bridge,
across the little bridge and up the
other side of the river......again, under the railway bridge,
stopping whenever a cyclist, runner, or walker
approached.

When we got back to the car, it was light.
SHE noticed the bridge under path was
fenced on the end--not on the path!

We have christened it, the NEVER AGAIN walk! 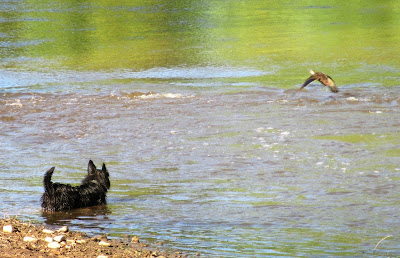 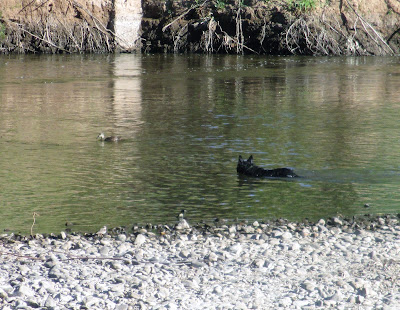 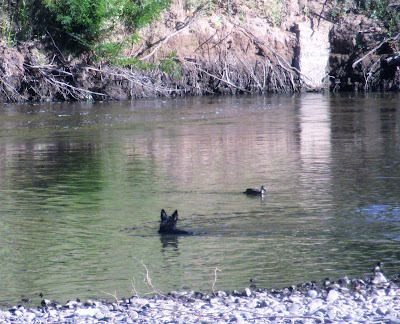 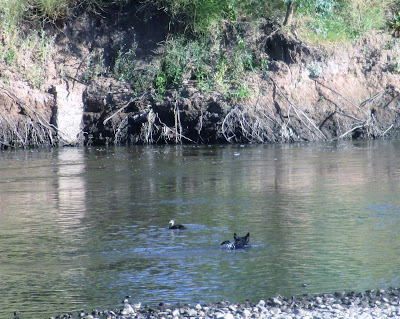 Saturday at the river....

We've been having 'clean' walks in the mornings.
But the weekend, it's the Devil's Hole
with all our friends.

Roxy was out of the car and dirty within 30 seconds. 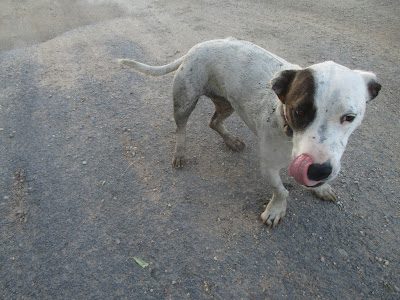 After our walk around the track, Bella raced to the river,
ready for the Rock Game.


Here she is again, a bit later.....after a tumble in the dirt.
Then it was off to play with everyone!

We hope you get down and dirty this weekend, too!
Posted by Bella Roxy & Macdui at 11:16 AM 21 comments:

Up and out before that sun.....again! 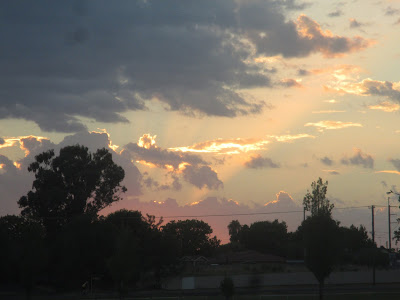 We're heading for another HOT day.

It was fairly dark when we started but not too
dark for us to miss a 'ROO!
Yup, the sheep weren't in the paddock
so Dui was off the lead.
SHE didn't even see the 'roo until we started
chasing it through the paddock.

Did SHE get any photos?  Of course not.
All SHE got today was
sunrise and kookaburras...... 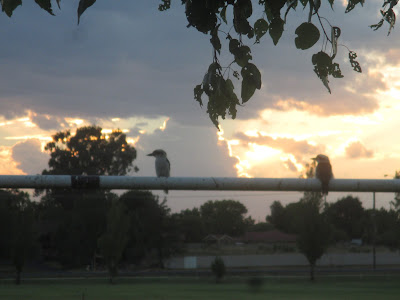 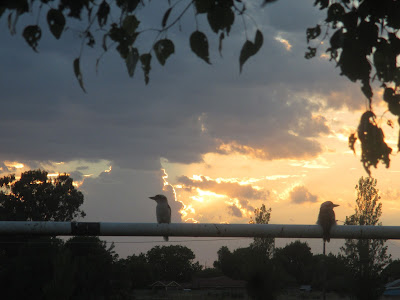 sitting on the goalposts.

Houston, we have a problem!

We are Early Risers
who like to head out on an Early Morning walk.
Seems, just a few weeks ago, we were
out and about by 5:15, returning home
just BEFORE the 6:30 flight to Sydney.

It's still quite dark at 6 a.m.
This week we were lucky that the
moon lit our way, and the track is light-coloured clay. 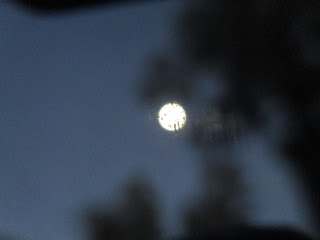 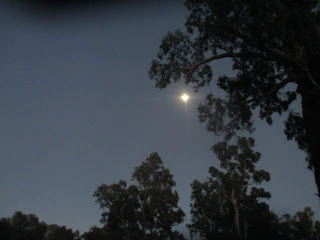 We're half way along the track, by the time that lazy sun even
opens his eyes! 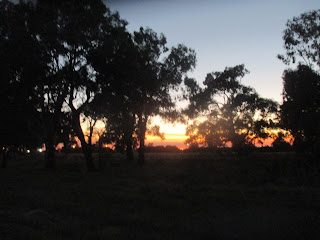 And on the way home before he finally makes an appearance
(over the panel beater's shop.) 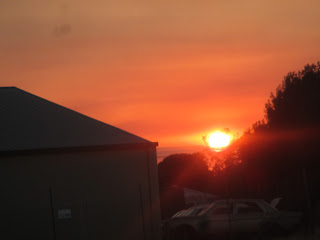 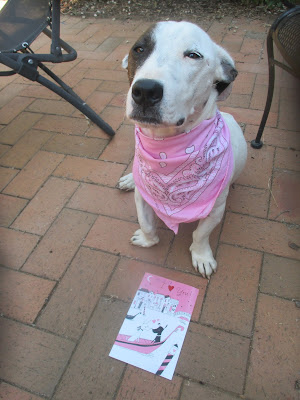 It says he loves me.
It looks like us in a gondola! 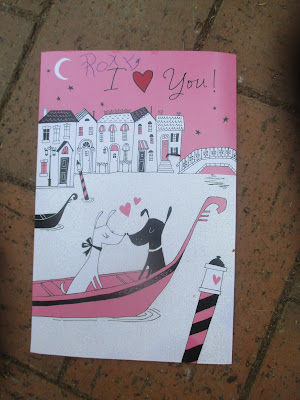 There is a beautiful poem, too! 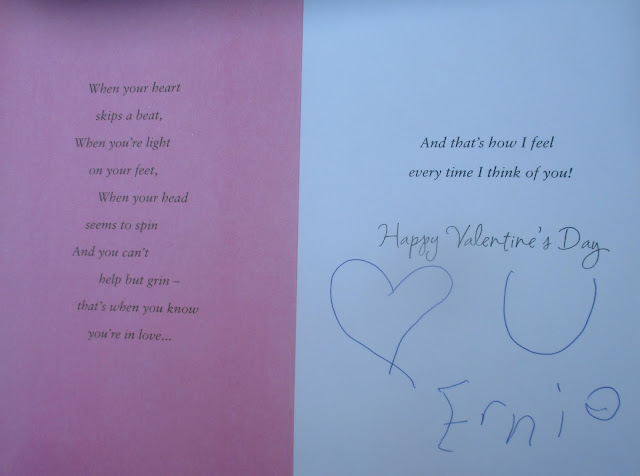 That's how I think of you, Ernie!
Happy Valentine's Day!

Thank you!  Can't wait for the dance.

As you may know, Bell LOVES standing in the river trying to catch rocks, or waiting for someone to throw rocks to her.

She chipped a tooth, so having real rocks thrown is now banned.

Frankie and Ernie sent her a blue Kurgo rock
which she loved, but it accidently
went down the river.
We now have a some spares. 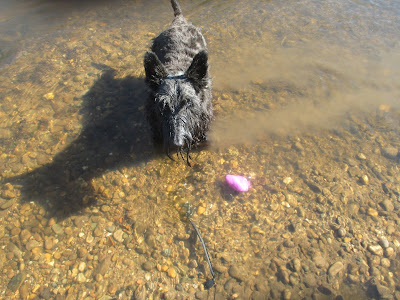 This pink one has been modified and attaches
to the retractable lead,
rather like a fishing rod.


Bella could spend hours catching her rock, diving and
chewing on it.

However this does not answer the question
of how Bella manages to get mud all over her
head! 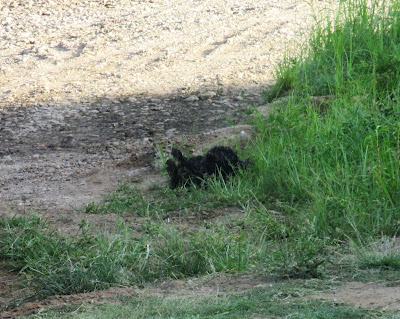 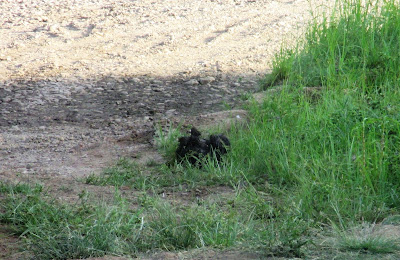 To all of our blizzard affected friends..... 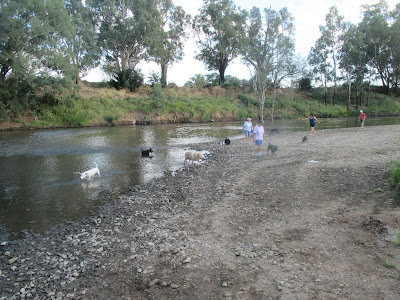 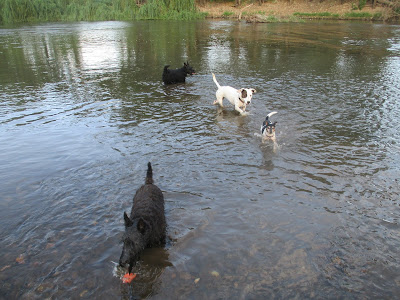 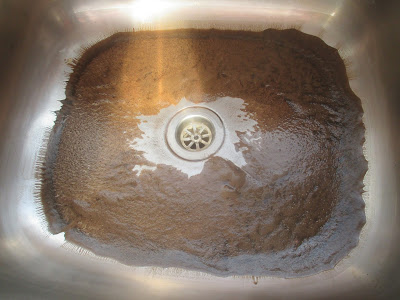 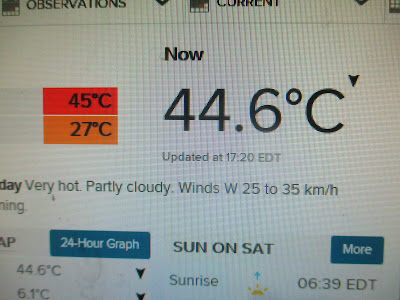 Our mornings have been cool(ish).
So we've been able to be outside in the mornings.


Yesterday, SHE was reading on the bed.
Bella likes to sleep next to HER when SHE reads--
between HER and the pedestal fan.

The book was  about the experiences of a young Vet
who lives and works in Dublin.

This story was about  a python
that wouldn't eat.  The Vet didn't like snakes and
she didn't really want to touch it.
But its owner  insisted she look into its mouth
to see if there was a problem causing the snake
not to eat.
Just then, Bella moved and her
tail slithered across HER back!
SHE leapt off the bed thinking it was a snake!