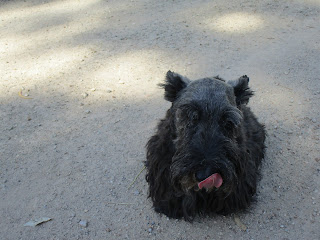 We went to the river yesterday to see if the 'new' rivers were gone.
They were--just flattened grass and mud where they had been.
It was a gorgeous day.
We were getting back in the car.  Roxy and Bella were
in, Dui was just about to be lifted in, when friends
arrived.  Dui was so excited, he was allowed to go
greet them.
After a few minutes of saying hello (the peeps keeping the proper distance) Dui was put and the car and we came home.
Gate was closed, and Dui's bicarb dunk was ready...…...
SHE reached in to grab Dui when WT**##
WHERE WAS BELLA!!!!!
Bella must have got back out of the car.
Dui got a quick dunk
And SHE took off with all sorts of worse-case scenarios
racing through her mind!
It was hoped that Bella would follow the others and NOT try to chase the car!
Happy to report that Bella did go back  to retrace our walk, and was with the others...tired from another walk around the track.
However, it'll be a long time the jokes about HER inability to count to three will stop!!!!