The story behind the Mini-Me photo. 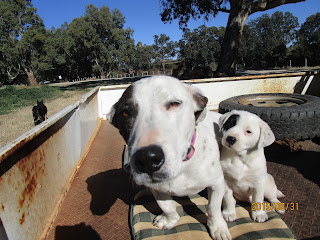 After our friend Chloe went to the Bridge aided by the dreaded 'C'.
A new dog was added to their family--free from a classified Ad.
Whisky is a supposed black labrador X
(crossed with something that has a beard)
She had had a poor start to life, was starved and ignored.
However, sweet-natured.  She wasn't too sure about all the dogs
at the river and stayed close to the humans, but wasn't aggressive.
After her first weekend at the river, she refused to come again.
Then.....
she produced two puppies (on HER birthday)
As she came off a property, and the pups are so large, we think they may be part Bull Arab.
This past weekend, they came to the river to meet all the dogs.
(Really, they are too young for that.--5 weeks)
Pirate, the mini-Roxy, joined right in with the big dogs.
He is very confident.
Bandit, the masked pup, (now called Pugsley because he is more cautious) took awhile to move away from the basket.
They are being weaned and will probably be surrendered to
the RSPCA for rehoming.
The RSPCA will microchip them, give them all their needles, spay them and vet all potential owners.
Here are some puppy photos. 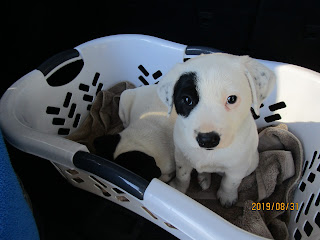 Note: we don't have room for another pup--no matter how cute they are!