On the way to the river, we stopped to refuel the car.  This sign was on the pump. 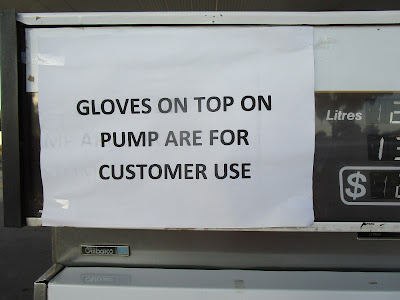 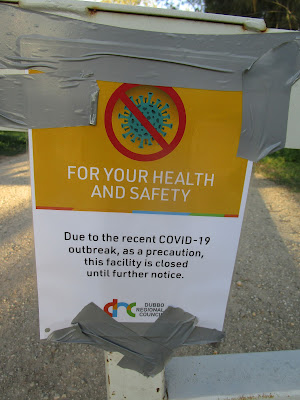 You know what that means 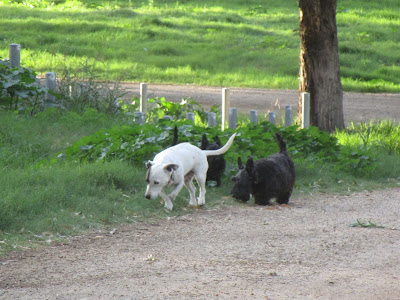 We had the place all to ourselves! 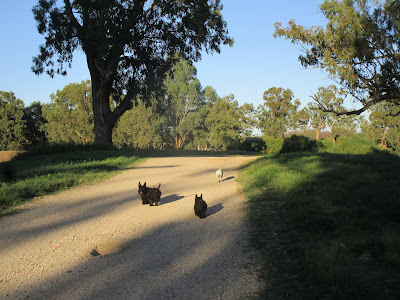 No SUVs
No KFC/McDonald's rubbish
Just us..... 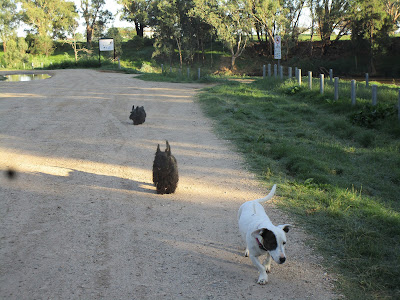 And the River Monster just keeping its head above water. 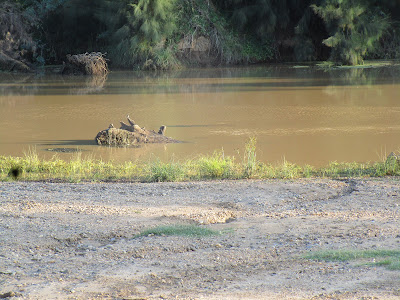 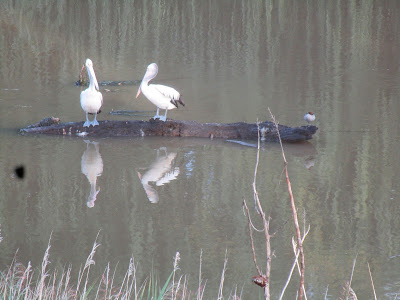 And those noisy cockatoos.

Last week SHE read that you can cut the bottom
off a celery bunch, put it in water and it would
grow again.
So SHE tried it with Bok Choi
Look, it's only been a week:

And this, we found a little duck family today.
An Autumn hatching. 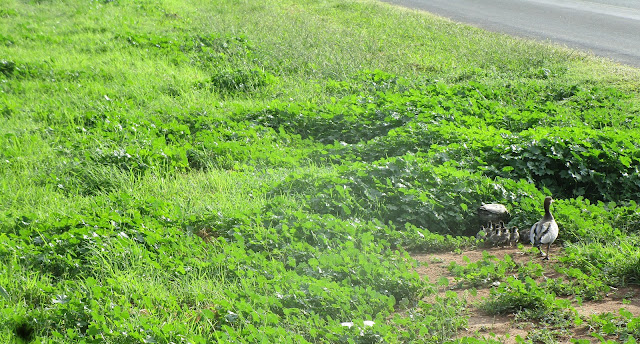 And the mystery?
When SHE returned from shopping today,
SHE found this in the study.
A chewed container that had 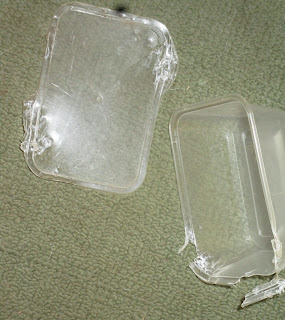 contained  meat for the magpies.
When SHE left is was on the kitchen bench
the meat was gone.....
and there were three short-legged, innocent-looking dogs!

Trying to beat the storm.....
We had the Police Paddock all to ourselves today. 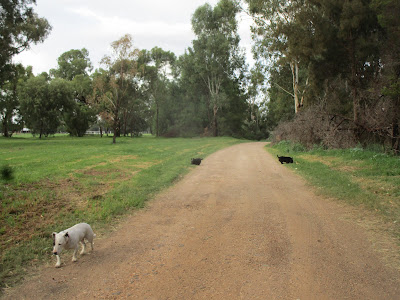 Dui made it the whole way around off-lead because there was no one on the Sports Ground...….. 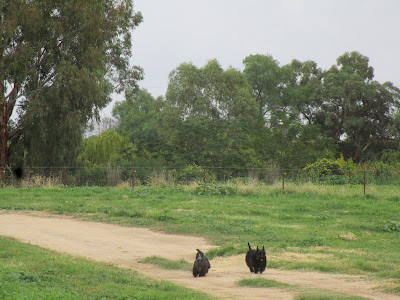 Or calves in the pasture.
But there was thunder rumbling in the distance. 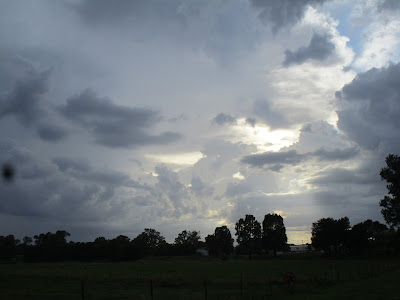 We had to hurry 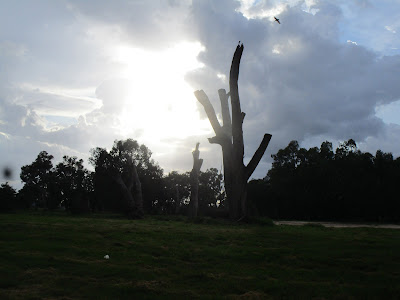 Ignore the mess and look out the door.
Do you see Dui social distancing from us? 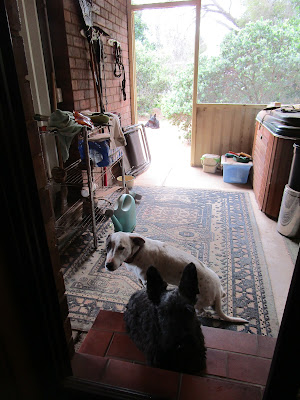 We've finished our 'after river' snack and we want to come in. 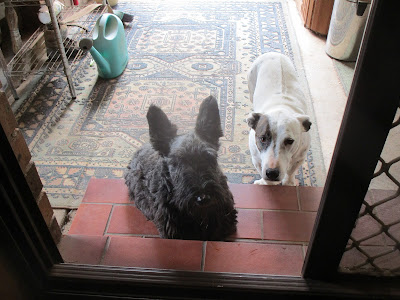 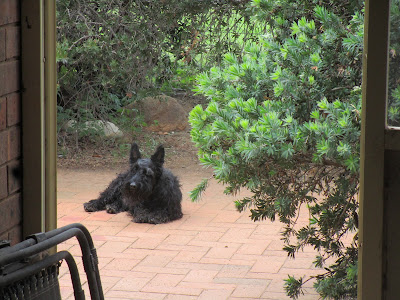 He has been itchy recently.
We think it may be some plant at the river.
Anyway, he has a bi-carb soda dunk when we come home.
Usually it is ready before we leave for the river
and Dui is carried directly from the car,
or  tricked and trapped later.
Today, the tub was filled while he was eating his snack.
So he didn't want to cooperate.

Later he was  tricked and trapped.
It does work.  He hardly scratches, and no skin inflammation.

(Stan and Murphy's mother said, she had Dunkin' Donuts
and we have Dunkin' Dui.)

We're thankful for crackers that can be spread with devilled ham-- 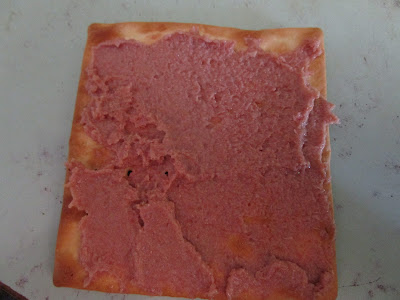 and break evenly into four pieces, 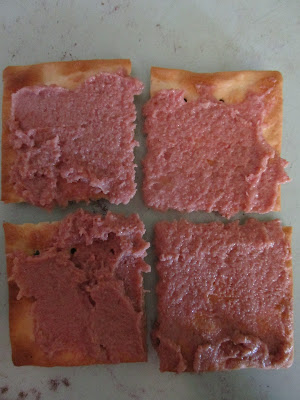 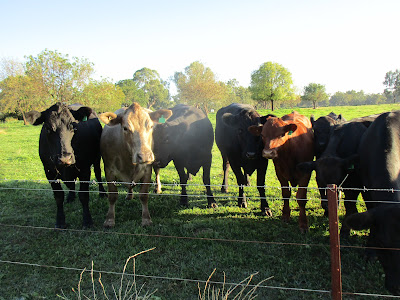 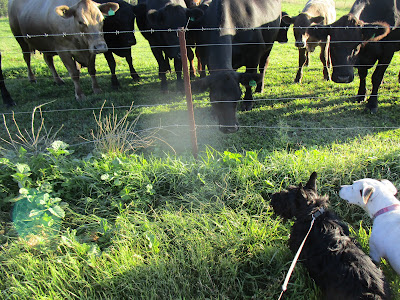 Queen of the River Monster.... 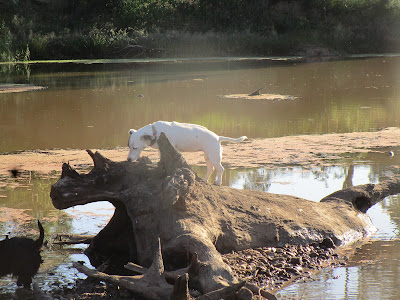 Our river level keeps going up and down.
Today is a down day.
Posted by Bella Roxy & Macdui at 5:54 PM 14 comments: